Northwich Man Killed in Road Accident on A556 Bucklow Hill 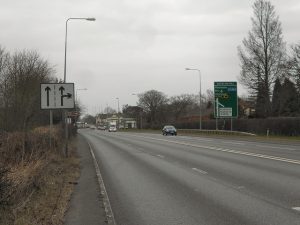 Cheshire Police are appealing for witnesses following a road accident on the A556 north west of Northwich at Bucklow Hill which claimed the life of a 52 year old man from Northwich. The accident, involving a blue Fiat Qubo and a grey BMW happened, yesterday, Monday 19th January, at approximately 4pm.  The Northwich man, driving the Fiat was fatally injured and died at the scene.

The stretch of road has recently had a change of speed limit due to the bypass works – between the Bucklow Hill crossroads and Bowdon Roundabout.

Cheshire Police are appealing to anyone who may have witnessed the collision to make contact with Cheshire Police via the non-emergency number 101, quoting incident number 515 of 19 January 2015.

This article was added on Tuesday, January 20th, 2015 at 3:03 pm and is categorised under Cheshire News, General News, Northwich Accidents, Traffic Accidents. Both comments and pings are currently closed.