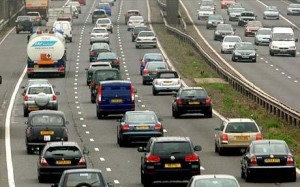 There were two serious traffic accidents on the M53 southbound on the morning of Tuesday 30 Sept causing road closures and delays.

The first crash was at around 9.20am. A woman aged 28 needed to be cut free from her car, after four cars and two vans collided, on the the M53 southbound between between Junction 3 A552 (Woodchurch) and Junction 4 A5137 / B5137 / B5151 (Bebington). The woman suffered a suspected back injury but at this stage it is not believed to be life-threatening.

A Merseyside Fire and Rescue Service spokesman said two appliances and a search and rescue team were sent to the scene and people in five of the vehicles managed to avoid serious injury.

The second accident happened approximately 80 minutes later on the same carriageway near junction 3 Woodchurch at around 10.30am. The crash involved seven cars and a heavy goods vehicle. It is understood that an air ambulance, five ambulances, the heart team, two rapid response vehicles, an advanced paramedic and the medical director were sent to the scene. Four people were taken by land ambulance to Arrowe Park and the Royal Liverpool, and another patient was taken by helicopter to Aintree. Details of injuries have not been released.

An investigation is underway to establish the cause of the incident.

Update: A  man in his 40s was pronounced dead at the scene after the Citroen car he was driving was involved in the second collision with eight other vehicles including a lorry.  His partner and front-seat passenger was left in a serious condition with back injuries. The driver of the Iceland lorry which was involved in the second collision – a 60-year-old man from Chester – was arrested at the scene on suspicion of causing death by dangerous driving. He has since been released on bail. (read more)

Should you find yourself injured in a road accident that was not your fault then our qualified experts are available for advice and a free consultation.

This article was added on Tuesday, September 30th, 2014 at 2:46 pm and is categorised under Cheshire News, Chester News, General News, Traffic Accidents. Both comments and pings are currently closed.