Mr D suffered from MS, an incurable, slowly progressing disease of the central nervous system, causing problems with muscle movement, balance and vision. He wanted to change his working pattern when his illness worsened but his employer refused! 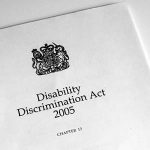 Our Director of Litigation took the matter before an Employment Tribunal pleading a case of constructive dismissal and disability discrimination. The employer was advised by the tribunal that working from home was one of ACAS’s suggested alternatives for working people who suffered with some form of disability. Shortly prior to a further hearing, a settlement was negotiated between the parties.

Mr D had Multiple Sclerosis (MS) and as his illness became progressively worse he asked his employer to work reduced hours or to work from home. His employers refused. Mr D had to use up all his holiday entitlement to work fewer hours, and when these ran out he resigned claiming constructive dismissal as well as discrimination under the Disability Discrimination Act.

An out of court settlement was reached for £8,000.

This article was added on Wednesday, July 9th, 2014 at 3:26 pm and is categorised under . Both comments and pings are currently closed.