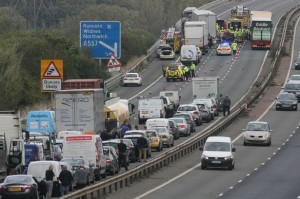 Two people were killed in a serious accident on the M56 eastbound near the Runcorn exit, junction 12, midday yesterday (Thursday 9th Oct 14). Two other people were taken to Warrington General Hospital to be treated for minor injuries.

Should you find yourself injured in a road accident that was not your fault then our qualified experts are available for advice and a free consultation.

This article was added on Friday, October 10th, 2014 at 2:31 pm and is categorised under Cheshire News, General News, Runcorn News, Traffic Accidents. Both comments and pings are currently closed.